CatholicAnchor.org
For those who like to reminisce on bygone Hollywood films, let me call to mind one that still occasionally raises social controversy. The year was 1967 and the film was “Guess Who’s Coming to Dinner,” starring Spencer Tracy, Sidney Poitier, Katherine Hepburn and Katherine Houghton. The plot concerns the Draytons, a wealthy, white, Catholic, California family who pride themselves in being “sixties liberals.”

The story begins innocently with Joanna, Joey (the daughter) unexpectedly returning to her childhood upper class California home with her new fiancé, John Prentice, a widowed black physician. The story opens with a homecoming dinner. The elder Draytons, of course, who consider themselves very open-minded, have instilled in their daughter the idea of racial equality. To their daughter’s surprise, however, the parents are upset at the thought of their daughter marrying a black man. What was intended to be a simple   dinner turns into a meet-the-in-laws party during which both sets of parents must face this issue. All ends amicably after heated discussion when the elder Drayton announces that it does not matter what everyone else may think about John and Joanna: all that matters is that they love each other.

The film is built around a dinner party which went awry and had to be delayed simply because the “wrong” people happened to show up.

It may be a stretch but we have a similar dinner story described in the Gospel of Saint Luke in today’s liturgy (11th Sunday in Ordinary Time). A Pharisee named Simon invites Jesus to dinner. Despite their obvious religious and social differences, we may assume that the dinner conversation was amicable until an uninvited guest, a woman of the streets, enters. Simon the Pharisee is horrified. The ensuing dialogue between Jesus and Simon went a little something like this:

SIMON: If my guest were a prophet he would obviously know that this woman who is touching him, kissing his feet and anointing him with expensive, fragrant oil is a public sinner. Obviously, she is not the sort of person who should be sitting at table with us, spoiling our meal and disturbing conversation.

JESUS: Well, let me tell you a story, Simon. Let’s say we have two people who owe a moneylender a certain amount of money, one owes an immense amount, the other a small pittance. Neither could pay up, so the lender says, well, let’s just forget about it. So, which of the two debtors should have been the more grateful?

SIMON: Why, the guy who owed the most, obviously.

JESUS: Exactly. This is the way it works in God’s kingdom. If you want to pay up but are unable, God says ‘“forget about it, I’ll take care of it myself.”

Jesus points out the underlying issue as they sit around the table. Namely, a woman came into the house under immense embarrassment but she showed him a great gesture of love and Jesus forgives her. That’s the way it happens in God’s kingdom; great love offers great forgiveness.

Interesting isn’t it what can happen when folks decide to sit down together amicably at table and talk out difficult matters.

The writer formerly served the Anchorage Archdiocese as director of pastoral education. He now lives in Notre Dame, Indiana. 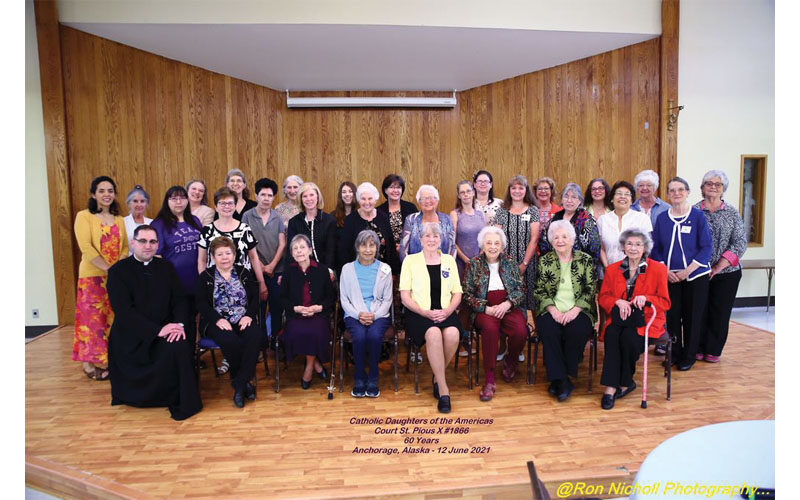 Catholic Daughters of the Americas celebrate 60 years of service

'Better to talk out your differences'
has no comments